Helping you enjoy the companionship of your dog or cat by providing nutritionally complete vegan pet food that does not contribute to the unnecessary suffering of other animals. 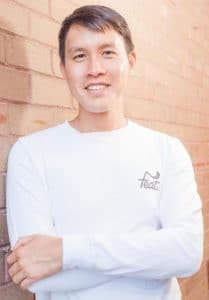 Hi! My name is Vince Law and I am the founder of vpets.

I was born and raised in Singapore and moved to Sydney, Australia in 2011. I became an Australian citizen in 2017.

My usual profession is a web developer. For those who don’t know what this means, a web developer is a programmer who writes the code that powers websites and web applications. I have been doing this for over 14 years and I take great pride in a job well done.

I have worked at many different companies and worked on numerous projects over the years but most of them were not very fulfilling for me. Being a careerist never appealed to me. I always knew that I would eventually end up doing my own thing because I see that as the best way to create fulfilling and meaningful work for yourself.

I started vpets with the savings I accumulated from my day job because I wanted to create a vegan business that would provide positive value to the people and animals I serve and make a positive impact in this world.

vpets would not exist if not for my wonderful animal companions who inspired me to start this business.

I truly believe that your animal companions are your greatest teachers. They are the little guardian angels in our lives that guide us in subtle ways, teaching us how to love and become better versions of ourselves.

It would only be fair to introduce all of them here to share how they have all played a part in the vpets story.

I adopted my first cat, Milo, in 2001. He was a tiny and sickly kitten who was about three weeks old when I found him in a box outside the lift on the ground floor of my apartment.

It was a miracle that Milo survived after I found him because he had to be bottle fed and had a strange skin infection that caused him to lose fur on his face and other parts of his body. He would go on to suffer from bald patches occasionally throughout his life.

He was diagnosed with urinary tract infection (URI) before he was two years old. My vet at that time told me I had to stop whatever I was feeding him to start him on a prescription diet, Science Diet C/D, for the rest of his life.

Milo struggled with a couple of serious illnesses throughout his lifetime. He had a very bad case of cat flu that he was lucky to recover from. He also had cat anaemia at one point in his life.

In hindsight, I believe the poor quality supermarket cat food my sisters and I were feeding to Milo was the cause of his URI. We didn’t know any better and I feel bad just thinking about it today.

It was through loving and caring for Milo that I first started to see the ethical problem of loving some animals while eating others. I did a seven-day vegetarian challenge in 2003 and I decided to go vegetarian permanently. I eventually became vegan in 2012.

Unfortunately, Milo is no longer here with us today. He passed away at the age of nine and a half in 2010 through illness.

One of the biggest lessons in losing Milo was I thought his life was too short and it could have been avoided. He could have lived for 20 years and it would have not been enough.

There was something in his meat-based pet food that was making him sick and I wanted to avoid making the same mistakes.

I adopted my second cat, Mini, in 2008. I bumped into her one floor below my apartment. I carried her up to my apartment floor and waved to her to follow me to get some free cat food. What I thought was a one-off incident became a regular one when Mini started returning to my apartment for food on a regular basis.

I eventually decided to adopt her to give Milo a sweet female companion because they got on really well.

I realised Mini was pregnant within a few weeks of adopting her. She gave birth to two kittens, Coco and Moca, shortly after and that’s how I accidentally became the crazy cat man with four cats.

I wanted to make things right with the other cats by giving them high-quality vegan cat food, Veganpet, from Australia. I kept Milo on his prescription diet because I was afraid his URI would flare up without it.

Even though the cats loved the Veganpet cat food and I was convinced of its quality, I could not afford to spend more money importing it from Australia because it was costing me more than I pay each month on my food. My income was quite low back then and it was simply not sustainable for my bank account. Therefore, I was forced to switch back to meat-based cat food.

In 2009, I decided to try Vegecat by Harbingers of a New Age (HOANA). This is the same Vegecat you see on vpets but this was before it was rebranded by Compassion Circle. They were quite unwilling to ship my order to Singapore because they had issues with previous orders getting confiscated by the Singapore customs. I took my chance and my order was delivered to me via sea freight after about two months.

The Vegecat packaging used to be in a large zip-lock bag. It came with a recipe and I followed it as best as I could to bake a large batch of vegan cat kibbles.

My first batch of Vegecat vegan cat kibbles was a success. It looked a bit like beef jerky and the cats seemed to have no problems eating it. I was convinced that home-made vegan pet food with vegan cat supplements was a viable option for vegan cat food.

I did not order more Vegecat at that time because I was not sure if I would get lucky with my future shipments to Singapore. I did not want to wait two months and have it confiscated. Once again, I switched back to meat-based cat food.

It was around this time that I first had the idea for vpets. I was tired of the difficulty in importing vegan pet food to Singapore and the only way to get around this was to apply for import permits.

I did not end up doing it in Singapore because I was planning to migrate to Australia. I decided to put it on hold until I have settled in Australia.

The cats finally resumed their vegan cat food diet after moving to Sydney in December 2011.

They have been on a vegan diet for over seven years and have recently outlived Milo by passing their 10th birthday in 2018. They do not have any major chronic health issues like Milo and I am very confident they will continue to be healthy for years to come.

The last addition to the vpets family was Rocky the village dog from Malaysia.

I remember it was Chinese New Year in 2010 and I was visiting my relatives in Malaysia. My father usually takes me to my grandfather’s old house in the countryside whenever we visit during Chinese New Year. What used to be a kampung (village) has now been converted into an industrial area.

My father wanted to adopt a dog for his house in Malaysia and he went to ask the workers if they have a good dog available for adoption. I remember the warehouse caretaker told us there is a very special puppy who acts like a king. He told us this puppy somehow gets to eat first while the others dogs wait until he has had enough.

We walked around to find him and finally found him hiding underneath a forklift. One of the first things I noticed is Rocky had a docked tail. One of the workers must have done it with the infamous “rubber band” technique that is commonly done in Malaysia.

I was lucky I had a camera with me that day and I snapped some good photos of our first meeting.

Rocky took some coaxing before he got out of his favourite hiding spot. He turned out to be a very friendly dog with a very cheeky personality. He looked and smelled like he had never had a shower in his life.

He had skin problems that would plague him for the first one or two years of his life. He used to give off a really bad odour from his body, which was most likely due to some bacteria infection he had on his skin. He used to scratch himself a lot and that caused quite a few bald patches on his body.

Rocky was lucky to have Natural Balance Vegetarian and AvoDerm Natural Vegetarian Formula dog food shortly after I adopted him. They are both vegan dog food products from the USA even though the title says vegetarian. Rocky switched to Veganpet vegan dog food after arriving in Australia.

Other than his early skin issues, Rocky has always been a very fit and healthy dog due to his mongrel background. His ancestors had to survive in a very harsh environment where only the toughest survive.

I have been told very often that Rocky looks like an Australian Kelpie after moving to Australia. I usually just smile because I am too lazy to explain his story to every person I meet. All I can say is Rocky is a very lucky dog living in the lucky country.

No products in the cart.